Dan lives just near Trophy Brewing Company (a cute new brewing company in Raleigh, though all our hipster friends point out the numerous breweries that keep popping up in Raleigh, I still like it). A few of us met up one week on a Wed night for a run at Dan’s, and wandered over the Trophy. The next week, Dan, Bruce, and I went for a run, then immediately following for a beer. There were other runners. We had even seen them out on our run!

What?!
How dare other people run and drink beer in our vicinity?

A week later, I noticed on their facebook page that Trophy holds a run group every Wednesday night. Just a note- they must have started that the week we noticed them, because we would have noticed sweaty people in running attire before then…

So Wednesday, we decided to join their social run. (If you can’t beat ’em, join ’em, right?)

We overheard her explaining the pace groups and mileage to people. Cheetahs were sub-8, Gazelles were 8-9 minute pace. I stopped paying attention then, but I think Lions were 9-10 minute pace. Then she asked each person how far they planned to go- 1 mile? 3 miles? 5 miles?

I just grabbed the sharpie and wrote my name (no one can ever guess that “Shan-Dee” is spelled Chandi), GAZELLE, 5miles. And she (shocked) took the sharpie back and directed her line of questioning to Dan and Dave. “Don, is it?” … [picture Dave and I calling Dan “Don” the rest of the night, as if it were hilarious]. Dave wanted to contest that he was not a Gazelle. I said loudly They are Cheetahs everyone; they’re just sticking with me tonight. I’m a gazelle. Sorry for the confusion. The check-in girl didn’t get my humor.

She handed out route cards. I glanced at it, and made an eye for the Cheetahs, thinking I could keep them in sight, as Dan and Dave slipped their name tags into their pockets. And finally, everyone checked in, donning their name tags, holding hands, and skipping through Glenwood South. Kidding! Just the name tags.

We started off a nice little route, past Moonlight Pizza Co., and over through Glenwood South (a slow steady downhill), then made our way over to Peace/Clark, which is a slow, grueling, steady uphill (for about 2 miles?). For some reason, I was the pack leader. Maybe because none of the boys in the frilly Gazelle group wanted to hold a piece of paper. Either way, I was setting the pace for us. And somehow ended up in front of the Cheetahs. 8:08 for the first mile. In the second mile, I tried to push it since the Cheetahs were still behind (8:33), and I think it’s common courtesy not to stop/slow on an uphill if it’s congested and paces haven’t really split yet. Finally, in the third mile, the Cheetahs passed, and Dan, Dave, and few other guys were able to slow/mellow a little (8:38).

We made a few turns through the Cameron Park/ University (NCSU) area, and eventually back down Dixie Trail to Hillsborough. At that point, I was experiencing that stupid cramp again. And every time I slowed, the pains were worse, so I pushed the 8:30 pace. And told the boys, I was going to slow at Hillsborough. I didn’t slow down any, but they sped up. Dan and Dave finally took off, showing their true Cheetah prowess, hunting down a few gazelle… (See what I did there? Yeah… Yeah, You’re welcome for that!).

When I got past the 5 mile marker, I slowed and jogged it in around the last curve until I saw Dan and Dave and the others congregating outside Trophy.

We chatted a little. Everyone was shocked that we went 830s, but then agreed that it felt hard, so maybe it wasn’t so shocking (they were trying to go closer to 9s, but maybe a tiny girl [me] gave them a little motivation to go faster/harder). 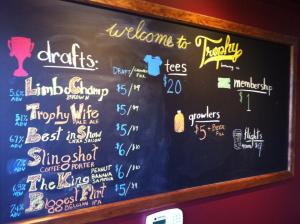 I stole this from their facebook page. Thanks guys!

What did I think about the run?

And then Dave had brought over a steak and chicken. Thanks bro! So we grilled out, and baked some amazing asparagus and sweet potatoes. We hung out on Dan’s patio, catching up, drinking Dan’s beers, while he grilled. Yum! Thanks boys!

Hello spring!
I have missed you so so much!

when the fit hit the shan...

Observations and ruminations from three women on the run

Running my feet, running my mouth

enjoying every second of life and running

I Run For Donuts

A collection of the hysterical, odd, and creative costumes that people wear during races.