Yes, you read that right. I am going hold back some details, because, well I have class (BAHAHAHA! No I don’t! I just can’t remember all the details).

Saturday night was my old friend Dave’s 25th birthday. Given that he is the youngest of our group, we felt it necessary to go out. He did as well. This Dave is not the Dave I run with. He’s a Dave that hooks up with one of my best friends, and the two of them are head over heels for each other, but she refuses to actually call them a couple. But, everyone else just presumes they’re a couple. Anyway, not the point. The point is- I invited Dan (guy I run with) out with me. He had met the gang before.

Dan was meeting some friends at the Borough. [There are three gay bars in Raleigh; the Bears go to the Borough, the Queens go to Legends, and the Twinks go to Flex]. Some of Dan’s gay friends were there. One I already knew (and loved! Someone said something really awkward and he looked around and took a long sip. I knew we’d be besties!).

Oh, and Dave was wearing a tie for his birthday. This Dave used to have dread locks and smoke pot all the time, and I kid you not- was a member of the drum circle in Asheville. So if he’s wearing a tie, all us girls decide to wear dresses. I didn’t tell Dan. But I was wearing my sequin mini skirt, black tights (with rhinestones up the side), and 5 inch heels.

I sent Megan a picture while she was working…

So we met up at the Borough, I ordered a Big Mama (most lesbian drink on the menu… not that I’m lesbian, but all the others had that weird combo of gin or scotch with fruity mixers). Then we made conversation, as I quickly killed the drink and we headed to meet up with Dave’s birthday gang. On the way, I got the traditional ‘So Megan and Dave aren’t together?’ and quickly briefed Dan on the situation. Megan (my oldest friend- like since I was 10) was working an event until 10pm in downtown, so she came over soon after. We moved the location a few times.

And then someone suggested Tequila. I don’t think I drank anything after that, but maybe I did? Either way, since I couldn’t remember I told Megan I would stay at Dan’s. (Dan and I had also made out a little at the bar. What?! It was only a little bit. A couple kisses really.) Then, I stayed at Dan’s. That’s all I’ll say about that.

But, I had agreed to cheer on the City of Oaks Marathon and Half Marathon in the morning, at Sarah’s. She lives at mile ~25. We were meeting at 8ish. 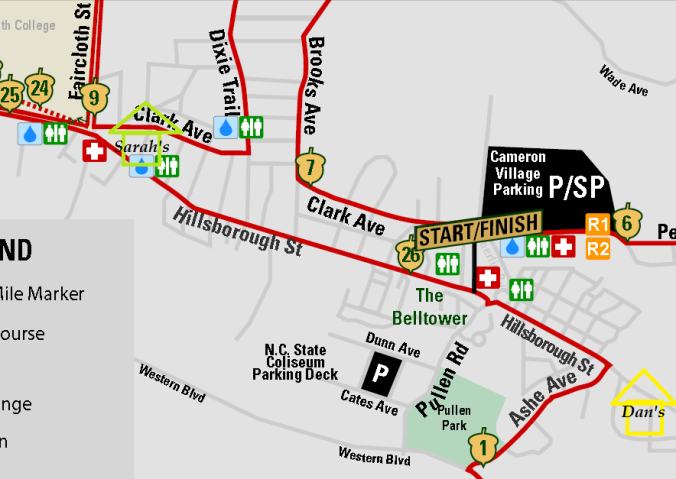 Dan is great. Have I mentioned that before?

Because I’m not used to that. I was all like… Oh god, I have to go (Allison and Sarah had been texting, then Allison called, and soon found out why I would be “late” and “walking” which she didn’t understand before hearing me). I asked Dan for a hoody (it’s cold outside). And he offered to give me a full outfit. Still wouldn’t fix the 5 inch heels, which were the major problem (and pants would have been big). And I calculated the distance- 1.8 miles.

So I was downstairs yelling up, “OK! I’m Leaving Now!” (Thinking Gosh he’s not going to even walk me to his door? Wow, what a jerk <- I date stellar guys). He yelled down Hang on! I’m trying to find my beanie! And came downstairs. I’m coming with you. (Btw- he left the beanie in Megan’s car) He was shocked I thought I was going to walk alone ~2 miles, especially when meeting fellow Tuna runners, who he knew.  We stepped outside, walked out to the main street, and Dan said “I could drive us closer” and I jumped on that. So we drove to the middle, but I still had to do the walk of shame from the finish (26.2) to mile ~25.

Dan went into Cup of Joe’s quick, then we saw Jarod (finished in 1:42?). And Carrie (1:43?). And there I am- sequin mini skirt, rhinestone tights, 5 inch heels, and a hoody. Yelling! Like a crazy person. And my friends running the half started pouring in. We rushed to Sarah’s and she handed me a “FREE BEER AHEAD!” sign which had “WALK OF SHAME” written on the back. And we all laughed about it.
[Our other signs- “Chuck Norris never ran a marathon” and “In our mind, you’re all Kenyans” <– Some woman said But I really am a Kenyan as she ran past. But most of the people got a kick out of the signs]

I had so much fun cheering people in though! The last mile- best spot for a spectator. Really. You see the fog start to lift. And one of our Tuna team-mates, Andrea. That girl rocked the half. Shaving 13 minutes off her PR (2:21 to 2:08). She ran the last mile in 8:30… And then the full marathoners started trickling in. And we just kept yelling and yelling for them.

Basically, I was stocking up on race karma. I totally believe in race karma. If I see someone struggling, I cheer them on (even if I’m hurting too), because I would want that if I was hurting that bad. If someone needs water, and I have some, I share. If they looked like they were hurting at mile 25, I reminded them of the cool space blankets, and the medals, and months of training leading up to this moment. And the stale bagels. And tried to make them laugh “Start practicing your photo finish! You only got a mile left to perfect it!” or Time to fix your hair or (when a speedy full marathoner was passing a slower half marathoner) Trip him! He’s going too fast!… Making us all look bad! Which usually made both people smile.

So now, on Tuesday, I still have to whisper because I have no voice. And Dan and I are going out to help me begin carb-loading tomorrow night. I can say more on all that later. For now- I’m focusing on stretching my legs, foam rolling, and wearing 2 inches or less on my feet this week.

Something I never knew until cheering people on- wearing something unique DEFINITELY helps! We cheered our hearts out for Wonder Woman and Gold Shorts Guy (who turns out is one of Dan’s friends, and dropped by later). We yelled for shirtless guys (in 40 degree weather?), and people with their names on their shirts. So I plan to do something- write “Candy”  on my arms/ legs. (No one ever pronounces Chandi right, and at mile 23, it would annoy me more than encourage me if they say it wrong, so I’ll embrace Candy- my “stripper name”).

FOUR DAYS! I keep wanting to go to Fleet Feet to get things. But I would just keep buying, and probably not need any o it.

This week marked a huge milestone for me: 20 miles. We set out to do 20 miles last Saturday, but blew our steam with a faster than expected 18. We walked another mile back to the car.

Yesterday, we set out for 20. And I could tell it wasn’t going to be a good day, as I woke up to some morning sickness (I am not pregnant, but if I don’t get enough sleep, I can’t keep food down in the morning). We set out to do a 10-mile out/ 10-mile back.

As we started into the neighborhood, Allison starts screaming and jumping, practically knocking Sarah over. I glance over as I’m running, and it’s a freaking copperhead! Coiled and ready to attack. Allison later says she’s pretty sure it was dead, which gives us some comfort. At about 12 miles into the run, a couple tells us there’s a snake ahead. Really?! So we keep running like little girls. Allison heard me step on a leaf or something and started screaming her head off! Which Julie and I almost fell over, he were so freaked out (there’s nothing scarier than not seeing what someone else does)… Turns out Allison had just thought I had seen something… We all have a good laugh about that. And it probably got us going on adrenaline until mile 14.

Allison has feeling great. So she kept getting ahead some, then looping back on a major turn. She ended up adding about 0.6 miles total. And it was nice to be able to see her a few feet in front of me… The last mile or so was mostly uphill (which sucks at the end). So we got to the same corner where Snake 1 had been… Allison and I stay on the opposite side of the road- just in case the snake wasn’t dead…

We continued the rest of the way uphill, looking around, scared to go near the edges of the road (that’s where it has been hanging out). She gets a little ahead of me because I needed a walk break for a slight downhill. My IT band screams on downhills. She suddenly screamed and ran back into the middle of the road. Then yells back at me, “SNAKE!” and points. At that point, neither of us were stopping until we got to the main road and our cars…

Allison did 21 miles (little running in circular sort of pacing at the end). I did 20.4… Just before she screamed about the snake, I got a little feklempt. 20 miles. That’s huge. 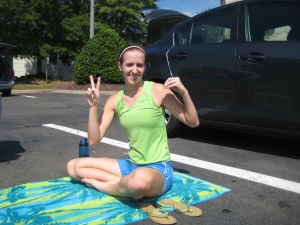 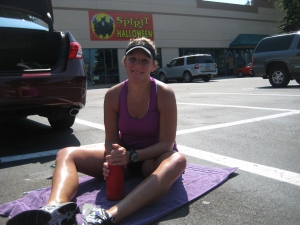 I mean, I remember when I couldn’t run for more than 10 minutes straight. And then, trying to do a 4 mile (and flat) loop, and having to walk some. Then the initial 12 miles. And all those milestones on the way. But, I felt so proud. I was in pain, but it was this amazing feeling, to know that if you push body, sometimes it responds exactly as you want it to.

We also agreed to out with “the boys” Saturday night. Dan & Dave want to get to know everyone better. About an hour before we were all supposed to meet up, Allison and Champagne bowed out, so it was just me and the boys. And they invited some friends out. So then, it was me and bunch of guys. All crazy crossfit-ers. They, like runners, have their own language. Thankfully, I dated a guy who was into crossfit before crossfit had gyms, so I understand the lingo because I would sometimes work out with him. It was a good time. I think some of the guys were trying to figure out who I was “with”- Dan? Or Dave? But I was very much a free spirit.

when the fit hit the shan...

Observations and ruminations from three women on the run

Running my feet, running my mouth

enjoying every second of life and running

I Run For Donuts

A collection of the hysterical, odd, and creative costumes that people wear during races.